If you only do one big run next year, make it the Brighton Marathon

This is it, I kept thinking; the point my legs stop working. Miles 20 to 23 of the Brighton Marathon are a grim out and back to Shoreham Power Station, a bottleneck between the English Channel and Shoreham Port. Here the miles take their toll. The roadside was littered with cramping runners; one man was sobbing. I’m next, I kept thinking.

But don’t let all that put you off.

If you only do one big run next year, make it the Brighton Marathon. It is the perfect run. The course winds past Brighton’s landmarks and out along the coast, the sea on one side, the rolling South Downs on the other. It’s flat. You’re never far from a crowd of cheering supporters, apart from on those miles to and from the power station. 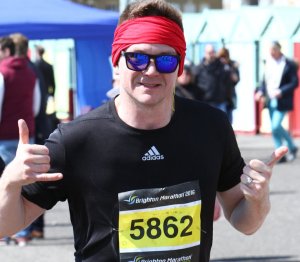 It’s perfect, in spite of (because of?) miles 20 to 23. That bleak stretch throws the carnival before it into stark relief. But for me it’s a happy place. At mile 22, I began overtaking people; it dawned on me: my legs aren’t going to give up. My ultimate goal – to run 150 miles across the Sahara – began to seem less like a pipe dream.

The carnival began in Preston Park, continued south and downhill into town, did a quick loop through the North Laines (it’s weird legging it along streets usually packed with shoppers) and passed the Pavilion, before turning away from the coast and uphill. At mile four we turned back towards the coast, veered through Kemp Town, where the party was already in full swing, and by mile six were heading west on the coast road.

I was both anxious and excited for these first few miles. My blood sugar had spiked at 13.5, probably as a result of all the pre race adrenaline, and I couldn’t find the 4:30 pacers, who I’d planned to stick with for the first 18 miles before gauging if I had it in me to pick up the pace for the final eight.

I found them at mile six and stuck with them until my epiphany at 22. Miles six to 14 were sublime, a long loop along the coast under blue skies and through cheering crowds, to the gentle slopes of the downs before turning back east past Brighton Pier and the regency terraces of Brunswick into Hove. Miles 12 to 14 were a blur; the roadside was packed with spectators. The crowd propelled me.

It wasn’t until 15 that I started to feel the distance. My blood sugar dipped to 4.0 so I took an energy gel (Clif Double Expresso). I took one every 30 minutes or so for the rest of the run. The boost I got from all that caffeine and sugar was nothing compared to that of seeing my friends and family at the roadside just after 15 and again at 17 and 19 – the looping course allows spectators to post themselves at multiple points easily.

Still, I didn’t ditch the pacers at mile 18. But by the time those feared miles were behind  me and I was back on Hove Prom, I’d left them for dust. I grinned like a loon (see the picture) for the final three miles. The final half mile was amazing. The crowds were roaring. I gave it everything. When I passed the finish line I was gasping. I’ve never felt anything quite like the euphoria that hit me. It nearly made me sick.

← Five low carb meals for marathoners
Is this the prettiest 10 miler in England? →

One thought on “If you only do one big run next year, make it the Brighton Marathon ”