Why all runners are really stoners at heart 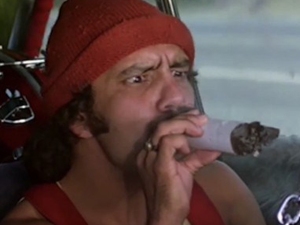 A lot of dope gets smoked on Brighton Seafront. In fact, I rather enjoy the fragrant clouds that drift from the occasional beachfront shelter or parked car as I run past; they mingle rather pleasantly with all the other seaside smells. And it’s not like I’m inhaling. A deep breath through the nose as I pass doesn’t count, does it?

It turns out runners have more in common with the seafront stoners than you might think. The other Saturday I ran 19 miles, my longest run so far in preparation for April’s marathon. For the rest of the weekend I was grinning like a loon. This threw the Mrs, whose nickname for me is Misery Guts. She kept asking if I was okay.

I was stoned. That’s right: blazed, baked, blasted, caned, high, whacked, wasted… you get the idea

In fact, I was stoned. That’s right: blazed, baked, blasted, caned, high, whacked, wasted… you get the idea. But it wasn’t the whiff of the HUGE bifter the boy racers were passing round as I passed that had caused my eyes to narrow (though it looked potent enough to make Cheech & Chong jealous); it was the running itself. This was runners high.

See, a recent study suggests that all runners are stoners at heart. The study links runners high with endocannabinoids, the body’s own version of pot. Two groups of mice – one with the cannabinoid receptors in their brain intact, the other with them removed – were made to run on a wheel. At the end of the exercise, those with the receptors intact were more relaxed and experienced less pain than the other group.

They were experiencing a runners high, it would seem. The report concludes: ‘Long-distance runners have described a runner’s high as a sudden pleasant feeling of euphoria, anxiolysis, sedation, and analgesia… we demonstrate that the endocannabinoid system is crucial for two main aspects of a runner’s high.’

So endocannabinoids help chill runners out, as Cheech or Chong might say (that’s the  anxiolysis); they also help ease the aches and pains that develop on longer runs (the analgesia). They might also contribute to the feelings of euphoria and sedation the researchers associate with runners high, but it’s a tough call measuring how euphoric or sedated a mouse is, so was beyond the scope of this study.

That’s not all that whacks us runners out at the end of a long run. Runners high has long been linked with β-endorphin, an opioid that builds up in the blood as we put in the miles. That’s right; an opioid, the body’s answer to opium. No wonder I had a smile on my face for the rest of the weekend.

← The first 300 miles: hypos, hope and scavenging Snickers
Nine weeks to go: Can a marathon ever be comfortable? →

One thought on “Why all runners are really stoners at heart”