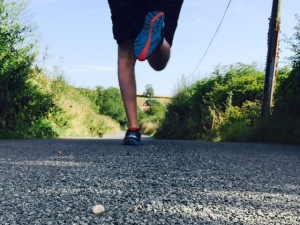 The Brighton Marathon takes place on 17 April 2016. My aim is to complete it in around four hours. That means running every mile in nine minutes and 16 seconds. Trouble is, my average pace over the 30 runs since starting this blog has been 10 minutes 58 seconds a mile. I have a lot of work to do.

So today I started speed training. Nothing too taxing; to avoid injury, my approach to speed will be to build it slowly. That’s why, with 33 weeks still to go before the marathon, today’s intervals (six 20 second strides with 40 seconds recovery a third of the way into my hour run) are the beginning of a 21-week schedule aimed at getting me through the 26.2 miles in around four hours.

Using Budd Coates’ rhythmic breathing technique, it’s not actually my speed I measure but my effort. The steady pace at which I bob along on during my runs is comfortable enough to be able to hold a conversation, inhaling on every three steps, exhaling on every two. For the strides, my breathing steps up to a still comfortable two one pattern (inhale for two steps; exhale for one) to allow me to run faster.

Aligning breathing to stride might sound like a massive headache, but it’s not. It takes practice but it soon becomes second nature. Running and breathing like this helps reduce the risk of injury and I find it makes it far easier to get in that zone where the minutes and miles seem to fly past. It also helps you safely up your pace without stretching yourself beyond the limits of your level of fitness.

And as the stats from today’s run show, my current level of fitness needs a lot of work. My average pace for the hour was 11 minutes and four seconds a mile. Way off the pace I’d like to be at in 33 weeks. For the strides it was between about seven minutes and nine and a half minutes a mile. That my last two strides were at more or less the pace I want to clip along at for an entire four hours in April was a big wake up call.

That’s not all. Before setting out this morning, breakfast was three poached eggs and a smoked mackerel fillet. I gave myself three units of Novorapid to keep my levels right. When I set off, my blood sugar was at 8.3mmol/L (149.4md/dL); on my return it was 3.5mmol/L (63md/dL). That’s fine, but over the course of the rest of the day, it’s dipped dangerously to around 2mmol/L (26mg/dL) twice. Thankfully, I spotted the symptoms.

So the need to get nutrition and insulin dosage right, as well as the challenge of building my speed up slowly, is why I’ve started my marathon training three months early. That and the fact the Brighton Marathon will be only the first landmark in the trail to the Sahara. The challenge (some would say idiocy) of running six marathons back to back across the scorched dunes of northwest Africa means I have no time to waste.

In my eyes, delaying the training schedule any longer would be the real idiocy.

One thought on “Intervals, insulin and idiocy: Why I’m starting my marathon training three months early ”