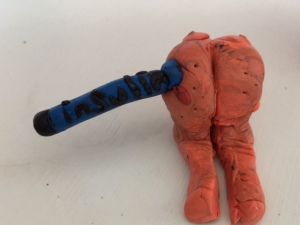 Sorry if you’re eating… for this is my arse. Not literally, of course; mine’s not quite so orange and is a lot larger. I was asked to make this monstrosity by medical device development company Team. Well, kind of. They didn’t specify that I should make a model of a gross, lumpy little backside; they wanted an object or character that conveys how I see type-one diabetes, as part of their ongoing #T1Dinsights research project.

And this is what they got (sorry again). I hope fashioning an oompa loompa orange arse doesn’t seem too facetious; this is a serious subject after all. And, believe me, I chewed through a fair few ideas before I came up with this. A ball & chain around a foot in a running shoe, an egg timer and Death himself holding an insulin pen were among the front runners, but I kept coming back to this. Why?

The ball & chain bit the dust because, actually, I don’t think diabetes has stopped me from doing much (exercise, travel, going out, staying out all night, etc). The egg timer appealed as a way of conveying my constant nervousness over whether I have enough insulin/strips/food to last for whatever I’m doing, but was out because of my lack of skill in fashioning stuff from modelling clay. And the Grim Reaper was just too dark.

So the arse it was then. Because diabetes is a pain in the arse, as represented by the super-sized insulin pen stuck in the left buttock (I don’t do subtle, you’ll have gathered). Of course, diabetes is much more than that. It cuts millions of lives short every year; misunderstanding and fear of it stops many more from living their lives to the fullest. But the arse isn’t about that. It’s about all the practicalities of managing diabetes properly.

And they’re endless: the juggling act between insulin dosage and food intake; the management of a repeat prescription list as long as my arm; explaining to prying doctors’ receptionists why I’ve got through so many tests trips, again; the constant blood tests and trail of strips I seem to leave behind me everywhere I go; never leaving the house without all the diabetes paraphernalia… It goes on and on.

During my twenties on nights out I would take a small shoulder bag stuffed with my insulin, glucose monitor and sugar with me. It wasn’t really the suspicious questions from bouncers and ribbing from my mates about the handbag that became a drag, it was the fear of losing the damn thing (which I did more than once) that would get me down. These days I go out with everything stuffed in my pockets.

This is a chore. There are thousands more too. But they are only chores. This is the point of my model: although diabetes can cause all sorts of serious health problems, it needn’t if it’s effectively managed. Effective management is a pain in the arse but it’s better than the alternative. I hope that my model, Diabetes: A Pain In the Arse, conveys that somehow. And that it hasn’t put you off your tea…

← The first 75 miles: Built for comfort, not for speed?
Intervals, insulin and idiocy: Why I’m starting my marathon training three months early  →

One thought on “What does type-one diabetes look like? ”